Michael Jordan once said, “I play to win, whether during practice or a real game. And I will not let anything get in the way of me and my competitive enthusiasm to win.” This relentless drive explains why every time a precocious prep school or college player is anointed as “the next Jordan” they never quite measure up. They might have the potential to jump as high, shoot as consistently, or run as fast as His Airness, but what separated Jordan was that his formidable mental game matched up with his physical attributes.

A college soccer coach recently told us, “Everyone has access to the same equipment and similar coaching and facilities, so it’s only our players’ mindset that can set us apart.” It was this comment that inspired us to write this article, in which we’ll share some of the ways that daily mindset training based on sports psychology best practices can help provide your team with a competitive advantage.

Think back to the 2008 Beijing Olympics, when Michael Phelps broke Mark Spitz’s record for the most gold medals in a single Games by winning an astonishing eight (not to mention also breaking seven world records). Most people are aware of Phelps’s medal tally, but we often overlook exactly how he did it.

I’m not talking about what happened in the pool or the fact that he trained with his Coach Bob Bowman every day for four straight years in preparation for Beijing. What I mean is the rituals that Phelps performed before each race. The flapping and circling of his condor-like arms, the same playlist blaring through his ever-present headphones, a precise number of laps in the warmup pool.

Your athletes might never reach the heights that Phelps attained in the Olympics. But they can learn to think like him and take a page out of his book when it comes to race day routines. By doing the same things in the same order every time, your athletes can prime themselves to enter a flow state in which they perform and feel their best. Ask each of them to think about every aspect of their pre-game preparation – music, warmups, which shoe they put on first – and then think about what they’d like to change to optimize their personal process. Then challenge them to be consistent with this winning set of rituals.

Right before a game, one of your athletes might be a bundle of nerves who is circling the ceiling, while another is struggling to get themselves hyped up enough to go out and perform. Their teammates are likely somewhere in the middle of this continuum. One of the things that champions learn to do is dial their intensity and focus to just the right levels so that they’re pumped up enough to play well without being so hyped that they’re exhausted before the competition even starts.

This all begins with them cultivating the self-awareness necessary to know how they usually are on game day, and whether their default settings are helpful or harmful. From there, how they act and perform going forward starts with how they think. Being present in the moment is a big part of this. It would be helpful if you told them that once they put on their jersey or lace up their cleats, they’re now in game mode.

You could even tell them to think about Superman after he comes out of the phone booth with the big letter S on his chest and his cape flapping behind him, or Wonder Woman when she picks up her lasso. They’re no longer Clark Kent or Diana Prince but superheroes ready to face their adversaries with full power. Then ask them to think about how these characters carry themselves – bold, fearless, with a confident swagger. This is what their team needs from them to prevail.

In a perfect world, every one of your athletes would wake up on game day to a sunny morning after nine hours of sleep, with no muscle soreness or niggling injuries. But we both know that’s not how it works most of the time. And more often than they’d like, your players arise to rain after a fitful, inadequate slumber wondering if this is the day that their troublesome hamstring will finally give out on them.

One of the differences between a contender and a champion is that they expect issues to arise and even when they’re facing the bad weather/tiredness/soreness scenario I just described, they still resolve to give their very best effort for themselves and their teammates. To cultivate such a winning attitude among your players, ask them what motivates them to try hard and who they’d like to dedicate this season to. This way, they’re not going to find their determination wavering on days when they don’t feel like showing up but will be able to tap into a sense of higher purpose that will help them keep going strong all season long.

4) Become a Predator (Not Prey)

Take a moment and close your eyes. Now picture a fearsome predator in the animal kingdom bearing down on its prey. What are the differences you can notice between the two? The former is on its toes, confident, and poised to strike, while the latter is on its heels, fearful, and resigned to its fate. When the first whistle blows or the starter’s gun fires, your players need to be that predator, not prey. Yet some might find themselves cowering from an opponent or wanting to run away from doing what’s needed to win.

To help athletes become the hunter rather than the hunted, I ask them to choose a predator animal that they’d like to channel on game day. For Kobe Bryant it was a deadly black mamba snake and for Greg Norman, a fearsome great white shark. In your next team meeting, have every player pick their predator and then explain which attributes they want to emulate during competition. Is it the ruthless precision of an eagle or the speed of a cheetah? If you have a team of predators on the field, your opponents won’t know what hit them until it’s too late.

Game day can be exciting for some players and terrifying for others. At Champion’s Mind, we hear a lot of coaches say that they have great practice players who for some reason can’t translate this into performing to the best of their abilities in competition. A frequent culprit? Pressure. Whether it’s the expectations of themselves or others, fear of failure, or physical and psychological symptoms like butterflies in the stomach, a feeling of panic, or even throwing up before kickoff, some players wilt when the heat is on.

Fortunately, every athlete can learn to reframe pressure. Champions don’t run from big moments – they embrace and welcome them. They see the championship game or the state meet as validation for all the hard work they’ve put in and relish the opportunity to show the world what they’re made of. They also come to accept their mental and physical responses on game day as a sign that they’re ready to perform. After all, nobody ever set a world record with a resting heart rate. Thriving under pressure might not come naturally to many of your players, but it’s a mental skill they can develop.

Mental toughness is often misunderstood as gritting your teeth, slamming your racket down, or yelling at yourself. But actually, being mentally tough means staying positive and proactive in the most adverse circumstances. All too often, a basketball player misses their first few shots, a wide receiver drops a couple of passes, or a swimmer’s stroke gets out of whack and their mindset completely changes. Suddenly, that confident athlete starts doubting themselves, repeating negative statements, and magnifying their small, mole hill-like errors into unclimbable mountains.

When this happens, they’ve already taken themselves out of the game mentally, and the self-limiting thinking patterns they slip into start adversely affecting their actions. Before they know it, they’re stuck in a vicious spiral that impacts them and, in team sports, their teammates too. Skills like breathing (yes, it is learnable), positive self-talk, and the four components of mental toughness – commitment, confidence, concentration, and composure – are the antidote to such issues. Consistently practicing these for as little as five minutes at a time can start to make a real difference and equip athletes of any age to bounce back from mistakes, break the cycle of blame and negative self-talk, and remain positive and proactive no matter what the scoreboard says.

Take the Next Step in Your Team’s Mental Game

Would it benefit you and your athletes if you could bring consistency, structure, and accountability to learning all the mental skills I just described? If so, the Champion’s Mind team program is exactly what you need. It combines a 12-module course with 110+ daily audios to give your players the performance tools and coping skills they need to win on and off the field.

You can find more information about our team license here. And if you’d like to see the course and our Coach’s Dashboard in action, please click here to tell us more about your athletes’ mindset needs. 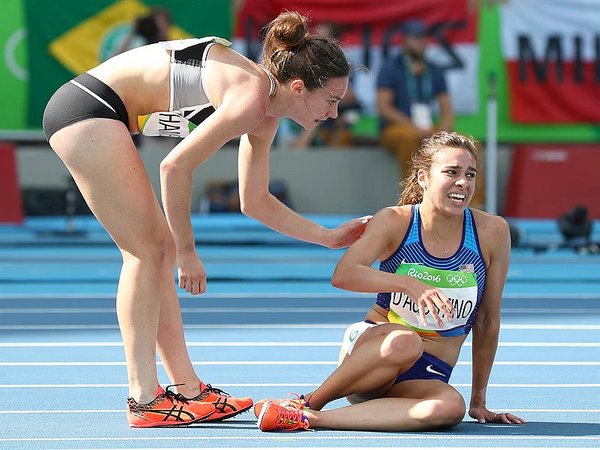 You need to learn to love your comeback more than you hate the setback. Your recovery is your new sport until you’ve healed, so embrace the challenge with the same level of dedication and commitment you usually bring to training and competition.

You wouldn’t leave your team’s physical game to chance or circumstance, but unfortunately that’s often what happens to the mental game. You probably do what you can here and there, but do you have a cohesive plan that you’re able to follow day in and day out?