Imagine sprinting at full speed with a giant carbon fiber spear, leaping as far as you can as you plant one end on the ground, and twisting your body like a high diver as the momentum flings you over a bar two stories above the ground. Before you know it, you’re on your back on a giant crash mat as the sellout crowd roars its approval. That’s what pole vaulters do in mere seconds, making what would be impossible for most of us seem like second nature.

The physical demands of this unique track and field event are difficult enough, but imagine the mental fortitude you’d need to catapult yourself into the air while controlling a pole that’s up to 17 and a half feet long without letting fear overtake you. To go inside the mindset of this discipline, we brought in two of America’s most promising vaulters, Garrett Starkey and Alexandra (Alex) Pevtsova. Garrett is a two-time high school state champion and an All-American at Stanford University, while Alex is a two-time Sun Belt Conference champion. Both have competed at the USATF National Championships, coach at the Arizona Pole Vault Academy, and have their sites set on a Team USA spot at the 2020 Tokyo Olympics.

With so few attempts per practice, how do you approach the mental aspect of that and really trying to make sure each rep is a high quality one?

Garrett: I try and visualize the cue that I’m trying to execute before each jump. It might have some technical aspects, which could be a new position with my legs or something like that. When I get on the runway, I visualize myself hitting that cue and then I go and do it. As you said, vaulting takes a pretty big toll on your body. Each one is a full sprint into a long jump into a gymnastic move. It's a lot of wear and tear. So you have to make every jump count.

Can you explain when you might use such visualization outside of practice?

Garrett: In competition, I use visualization a lot to relax and try and bring my excitement level down a little bit when I’m off the runway. Let's say my hamstring hurts one day and I decide not to practice, I'll go through a full practice in my mind, visualizing each jump. I'll picture warming up, doing the little drills that I do before each session, and then going through all my vaults in my head.

Alex: I think visualization is super important in and out of practice. I don't use it so much after a training session, but it’s useful the morning of a meet and sometimes the night before. For practice, I'll usually put myself on a timer and visualize the things that I want to work on today and picture myself doing them right. I do that every day over several weeks before a big meet.

If I’m about to enter an indoor season or if there's a championship coming up, I'll preemptively start picturing myself standing at the back of the runway about to go. You never know what’s going to happen in competition. You might blow through all your poles and no height [not land a successful vault] or you might have to take 30 jumps. The more practice you have visualizing that space and you being there, the better.

Garrett: Another big thing that I've discovered is that while in the past I've used visualizing for technique changes, this year I’ve struggled with motivation. I started using visualization to help me become more motivated. I’m picturing the ultimate goals I want to accomplish and what they look like in vivid detail. Then I think about how it would affect my life after accomplishing those goals. I make it so real in my head that it almost brings tears to my eyes. This has really helped with the motivation issues that I was having earlier this season.

Want to master visualization but don’t know where to start? Download the Champion’s Mind app now for your Apple or Android device.

You can create goals for different conditions, situations, and scenarios. If you keep track of things this way, you’re always PRing and moving forward." 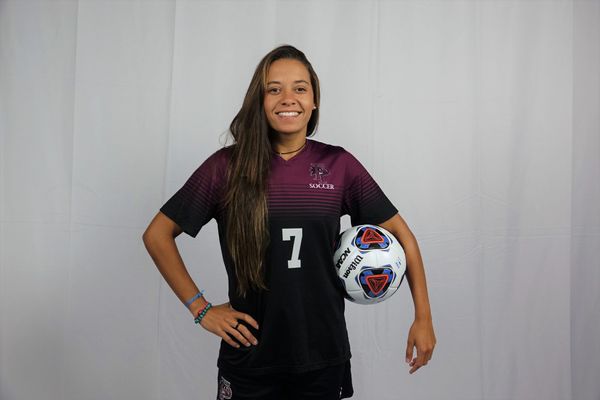