When you’re a high school or college athlete, it’s easy to let academics, training, competing, and your social life fight against each other for your attention and energy. The result? You end up worn out and find it hard to prioritize, so your performance in every area suffers. If you’re a student athlete, today’s article is for you. In it, champion pole vaulter Garrett Starkey shares how he kept his head above water while attending Stanford University. Then his partner and fellow pole vaulter Alexandra (Alex) Pevtsova reveals the most impactful lessons she learned from her former coach, Daniel Ryland.

Stanford’s academic reputation precedes its sporting one. How were you able to keep your standards high, both in the classroom and at the track?

Garrett: That was definitely a huge struggle that I had while I was there. One semester I was also a TA for exercise physiology, so I had three things that were big responsibilities. Every 20 minutes of my day was budgeted on a calendar. Then I’d fit little study breaks in. The biggest thing was picking my priorities and writing them down. And, that way, I had that filter to look at my decisions through.

For instance, when I was in the middle of my season, pole vault was the number one priority. Then academics and after that, my social life. When I had a block of time that I was trying to decide what to do with, I would take that priority list and say, “Alright, my friends want to hang out tonight. But, I have practice tomorrow morning, I really need a good night's sleep, and pole vault is the number one priority right now. So I’ll stay in my room.”

This process really helped me. It made sure my priorities were right in the moment, and acknowledged that these priorities change throughout the year. Then I tried to adjust my decisions accordingly.

So how you spend your time and who you spend it with ultimately reflects whether there’s convergence or divergence between your stated priorities and what you’re really prioritizing?

Garrett: Yes. I have a planner and I like to hand write everything as far as my schedule goes. Every Sunday, I plan out the next week. It's a lot easier to make good decisions when you plan ahead, rather than trying to make choices in the moment. The same thing applies to eating. If you plan out your meals ahead of time, you’re more likely to eat healthfully in the future than if you're hungry and trying to decide what to eat in that moment.

What is a lesson you learned from a coach that has stuck with you?

Alex: I remember a couple of funny little things that my pole vault coach growing up, Daniel Ryland, would say. I recall him saying one of these to a high school vaulter that I had introduced him to. He was trying to get a little leaner, but his parents always took him out to eat. Daniel said, “Just eat until you're satisfied, not until you're full.” My friend replied, “I never thought about that.” It just kind of stuck with me. Daniel would also tell me, “Everything in moderation, even moderation.”

He was a very accomplished pole vaulter who’d competed on the circuit and had a 19 foot two and a quarter inch PR [5.85 meters]. His injuries at this time were always freak accidents that he kept getting into. He’d fall off things and once got knocked from his scooter at an intersection. What I learned from these stories is to play it safe when it comes to that kind of stuff. I love taking risks and I love excitement, but I've just never been much one for letting the risk out of my own hands, if that makes sense.

Yeah, it does. How about you, Garrett? Is there a particular saying or lesson from a coach that you still go back to?

Garrett: In high school, my perspective was, “My dad knows everything and his way is the best. It was interesting going to a different coach in college, who had another perspective on training. Something valuable that I learned from him is that it's better to be 1% under-trained than 1% over-trained. If you're over-trained, you're going to get hurt, become fatigued, and burn out. Whereas, if you're slightly under-trained, maybe you didn't hit that ultimate threshold, but at least you're healthy, can show up to meets and compete, and have more longevity. I'd rather err on the side of staying healthy and not hurting myself, rather than going out and pushing myself too hard.

Want to train your mind alongside Alex and Garrett? Get the Champion’s Mind app for your Androidor Apple phone now.

Miss the previous installments in this series? 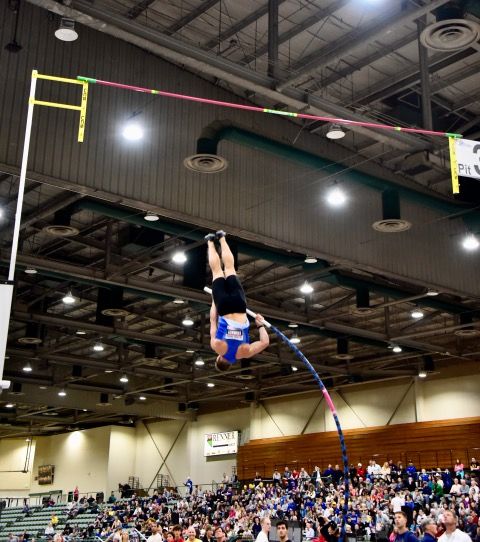 "I try to be a lot more relaxed during the day leading up to the meet. I listen to calm, peaceful music earlier and then put on a faster playlist 30 minutes before I vault. This way, I’m getting amped up at just the right time." 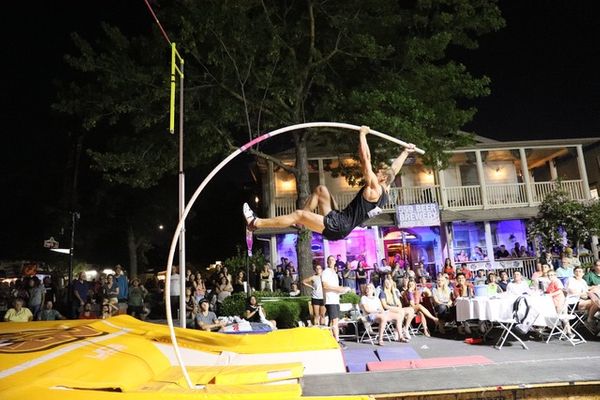 You can create goals for different conditions, situations, and scenarios. If you keep track of things this way, you’re always PRing and moving forward."